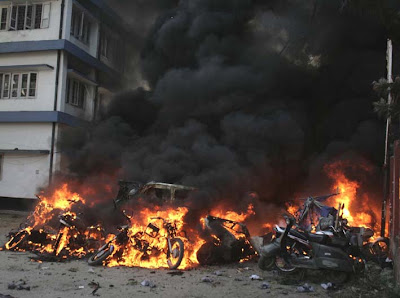 Maybe I'm running this subject into the ground. If so, I apologize. Like the weather, it will change soon.
But I continue to be gobsmacked at finding myself living in a country that will not take the simplest, easiest, cheapest, and most effective measure to prevent jihadist terrorism, right here at home.
Consider this exhibit, from the New York Daily News. It's headlined "Enemies within: America must face the threat posed by homegrown terrorists."

Homegrown terror, so lightly dismissed by so many for so long, is sprouting perilously from American soil. Najibullah Zazi, indicted this week on charges of plotting an Al Qaeda bomb strike, is the terrifying face of a strain of radical, violent Islam within the U.S.

His case history documents how terrorists can fade into the fabric of the country's pluralistic population and how easily they can fashion explosives out of readily available products.

"Homegrown"? Since when is Islam a "homegrown" American politico-religious system? But the Daily News follows the liberal rulebook. Which means it has to pretend Islam is as American as hot dogs. And that "pluralistic" population, meaning in this instance multi-cultural, that mad bombers can easily fade into is precisely what the Daily News and its ruling Ministry of Propaganda are forever celebrating.

The paper proceeds to list other "enemies within":
Notice any common denominator or similarities in these, uh, suspects? Of course you do. Of course the ink-stained wretch who wrote the editorial does. But it cannot be published. It is a Forbidden Thought. So, how can we protect ourselves from these "enemies within"? By stopping them from getting within? Certainly not -- are you a crazy right-wing extremist? That would be discrimination. We must not discriminate against adherents to an all-encompassing world view that churns out jihadists. All we can do is either wait till they are caught plotting, or -- are you ready for this?

That's why the see-something-say-something rule must be reinforced. Why authorities must educate sellers of beauty and hair products that can be perverted to evil. Zazi bought loads of such stuff in Colorado. Why New Yorkers must accept the mild intrusion of even more bag inspections in the subways. And why Congress must not weaken Patriot Act provisions that enable authorities, with warrants, to wiretap and seize records of terror suspects.

Our first response must always be, "Welcome to America!" Then, after giving these barbarians time to, as the Daily News puts it, "fade into the fabric of the country's pluralistic population," we can fight back by "saying something" when we "see something" -- as if terrorist plotters sit down at a picnic table in Central Park to assemble their nutcase souks, sorry, I mean suitcase nukes.

Beauty and hair products sellers of America, stand tall! You are our first line of defense against the violent jihad!

Don't worry about running this topic into the ground, it needs to be repeated. But I'm at something of a loss as to why immigration is so sacrosanct, and it seems to be something other than just "discrimination". Perhaps it's that we as a nation feel that we don't deserve to have our own nation after decades of leftist propaganda.

as if terrorist plotters sit down at a picnic table in Central Park to assemble their nutcase souks, sorry, I mean suitcase nukes.

Even if they did we couldn't 'say something' for fear of being accused of racism, bigotry, xenophobia and all other manner of hate-based stereotyping. All of which cause Islamic extremism in the first place, didn't you know that?

Thanks for speaking to this "homegrown terrorism" b.s.